This weekend my sister and I spent a weekend at Starved Rock near Utica Illinois. We spent one evening strolling the little tiny downtown, And found a charming place called Skoog’s Pub and Grill. . There was a Swedish flag in front, so we were intrigued ,being of Swedish ancestry ourselves. We found out that the owner of the restaurant is Swedish, But there is no Swedish fare on the menu. However we had the chance to sample deep-fried macaroni and cheese balls, which I have always been curious about. They were served with a side of ranch dressing or marinara sauce. Both were delicious; I liked both at the same time. I had a deep-fried cod sandwich which tasted very fresh and delicious , and homemade coleslaw . We also sampled their homemade drink which they called JuicyJuice: a combination of several fruit juices vodka and rum. It was all pretty yummy and if you are ever in Utica Illinois I would recommend this place 🙂 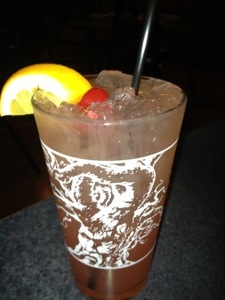 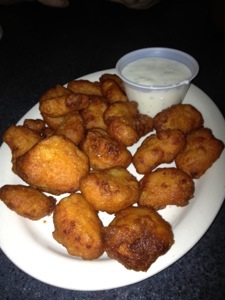